Celebration of International Day of Women and Girls in Science 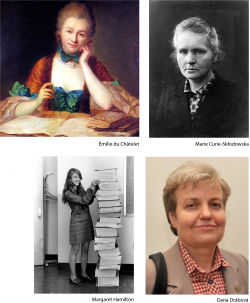 Today, Friday 11 February, we celebrate International Day of Women and Girls in Science.

The aim of this day, which is taking place for the seventh time this year, is also to point out the still low representation of women in science. As in previous years, the Czech institutions have prepared accompanying events to this day. International Day of Women and Girls in Science was declared by the UN General Assembly in December 2015 and was celebrated for the first time the following year. This year's theme is Equality, Diversity and Inclusion: Water unites us.

This International Day not only commemorates the important role of women in science and research but also points out that the global representation of women in science is still low, with more than 33% according to the UN, which is roughly in line with the EU average. However, the Czech Republic ranks last in the EU in this respect, with less than 27% of women researchers. Therefore, it is necessary to work on fairer conditions in science for all. Only in this way will science bring the best results for society as a whole.

Let's present some important women researchers across the centuries:

Émilie du Châtelet was a French mathematician, physicist, philosopher and especially an Enlightenment in the 18th century.

The most important were her physical works (Institutions de physique), her concept of kinetic energy, according to some commentators, anticipates Einstein's relativistic concept. In her work Dissertation sur la nature et la propagation du feu, she predicted infrared radiation.

She translated Newton's Principia Mathematica and The Fable about Bernard Mandeville's Bees into French, in whose preface she sought the education of women. She also wrote the philosophical Discours sur le bonheur, which also focused on the women's question. In her work, she opposed John Locke. She also studied the Bible (Examen de la Genèse, Examen des Livres du Nouveau Testament).

She was also known as the mistress of the philosopher Voltaire, with whom she collaborated on scientific experiments. Voltaire about her in a letter to Frederick II. He wrote to the great man that he was "a great man who has only one flaw - that he is a woman."

Marie Curie-Skłodowska was a prominent Polish scientist of the 20th century. She spent most of her life in France, where she researched physics and chemistry. Her greatest achievements include:

Under her guidance, the first research into the treatment of cancer with radioactivity was also conducted. Curie-Skłodowska has twice been awarded the Nobel Prize. For the first time in 1903, she received a physics award for radioactivity research with her husband Pierre Curie and radioactor discoverer Henri Becquerel. For the second time in 1911, she was awarded the Prize in Chemistry for the isolation of pure radium.

Margaret Hamilton is an American software engineer and businesswoman. She was Director of Software Engineering at MIT Instrumentation Laboratory, which developed flight software for the Apollo Program. In 1986, she founded Hamilton Technologies, based in Cambridge, Massachusetts, USA. During her life, she has published about 130 articles, reports and various documents. In 2016, she received the Presidential Medal of Freedom from US President Barack Obama.

Ing. Dana Drábová, Ph.D., Dr. h. c. mult. is the most important Czech scientist working in the field of nuclear physics and safety. He is currently working on the issues and development of nuclear energy in the Czech Republic with an international dimension.