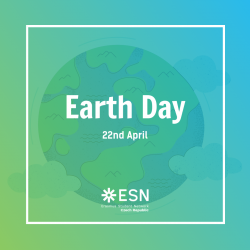 The idea for Earth Day was originally born in 1969, when a US Senator named Gaylord Nelson, witnessed the effects of a massive oil spill in Santa Barbara, CA. He called to action all Americans to take a stand for the environment in 1970, and thousands of colleges and universities across the United States organized protests for a healthy, sustainable Earth. This included air pollution from factories and freeways, as well as the loss of habitats for animals and animal extinction. Because of these national rallies, the first Earth Day helped create the United States Environmental Protection Agency and the Clean Air, Clean Water, and Endangered Species Act into law.

Today, we have similar concerns, and unfortunately, they are even messier than that original oil spill. Increasing natural disasters, extreme weather, and rising global temperatures may seem impossible for one human, let alone millions or even billions of humans, to slow down, or stop. It has been reported that coral reefs are dying, we see pictures of animals on land and in the ocean with trash in their bellies or around their body, and corporate factories and large companies around the world continue to pollute our air and our living spaces. But a small action, like picking up litter on the sidewalk that may have otherwise ended up around the neck of an animal or in the ocean, still makes an impact — a step in the right direction, and an important change.

Get creative with new ways to switch up your commute, or a part of your daily routine. Instead of driving to your destination, carpool with friends, take public transportation, walk, skate, scooter, or ride a bike. Depending on the weather, you may enjoy this new form of travel even more than sitting in traffic.

2. Reuse, and recycle your wardrobe

Though it may seem insignificant in the grand scheme of things, your closet and your shopping habits can actually have a negative effect on our environment. By buying gently used outfits online, new resources aren’t used to make more clothes that will eventually end up being repurposed, reused, or in a landfill. Some studies have shown that online shopping is better for the environment because it takes about 30% fewer resources to sell items online. Fire up your Amazon Prime app!

3. Switch up your diet

Most people may know that food production accounts for one-quarter to one-third of all greenhouse gas emissions worldwide, and the majority of the blame falls on the meat industry. The BBC recently reported that if the entire world became vegetarian and ate no red meat by 2050, food-related emissions would decrease by about 60%. If the world went vegan instead, emissions would decrease by around 70%. It may be time to try out the new ‘Beyond Meat’ burgers.

Do you want to educate yourself?

Follow the https://www.earthday.org/earth-day-2022/ and watch the live stream of conference dedicated to this year's topic of Climate change.

Source: https://nationaltoday.com/earth-day/
Back to top